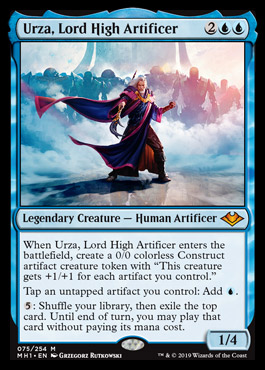 As a bonafide Urza card, this will get a lot of hype. It's also probably going to be one of the strongest monoblue commanders out there. Playable in Modern, though? Legacy? That's going to be harder, and tournament decks ask a lot of a four-drop. They pushed this, but did they push it enough? I figure this'll be a casual superstar no matter what, but if it can't fine a niche in competitive formats, it'll fade away as a fad.

First up, there's the mana cost. 2UU is not usually the cost of a playable card in most tournament formats. It certainly would be in Standard, but this card is part of a set that explicitly skips Standard. It's the whole point. So that's out. In Legacy and even in Modern, card costs are hyperefficient and four-drops have to have immediate high impact to see play. Other blue four-drops include Opposition and Jace, the Mind Sculptor. Cards that take over the game quickly. Even classics like Control Magic, which lets you outright steal your opponent's best creature, don't make the cut in tournaments. So already we're off to a bad start.

Next, there's the power and toughness. 1/4 isn't necessarily a bad spot for a creature like this. It can stay out of range of Lightning Bolt if you need to protect it. But in a pinch it can go into combat and kill the smallest attackers. It can stave off 2/2 attackers, and many aggro decks across multiple formats will be swinging in with a 2-power attacker early on, something like Goblin Guide. Four mana is far more than you'd ever want to spend for that, but being a 1/4 makes this way more flexible than if it had been a 1/3 or a 0/4.

And then there's the first ability. It's an EtB trigger, which loads some of the power from this thing outside of itself so that even if it's killed, you got something for your mana. An artifact token creature that gets power and toughness equal to the number of artifacts you control is definitely not worth 2UU, but it does provide something for those really bad scenarios. The card has no built-in way to reuse that first ability, but the ability does function well with bounce effects, blink effects, etc. Not great, but it's a start.

The second ability is where things get really interesting. It's probably inspired by Tolarian Academy (because it's a noteworthy card and in the lore, Urza created the academy), but has little in common with that card. I'm really torn on how to evaluate this ability. It scales nicely with artifact token-generators and is a nonbo with some of the best, most heavily favored artifacts in the game. I mean, you probably aren't using the ability on Sol Ring or Grim Monolith. They make mana already. You also might not want to use it on Isochron Scepter or Voltaic Key. Their tap abilities are strong and are the reasons you run those cards anyway. On the other hand, it does let you easily control when you tap your own Winter Orb or Trinisphere. That's moderately useful. But what you're really hoping for is to be able to flood the board with artifacts, and artifact decks are already good at that because of mana-producing artifacts. Notably, this ability does get around Null Rod. Ultimately, a tournament deck probably isn't going to be running lots of cards like Ornithopter and Phyrexian Walker to take advantage of this. Looking at tournament artifact-based lists, there's more stuff like Mox Diamond and Mox Opal, which don't need help from Urza's ability.

One thing that's quite nice is that the first and second abilities synergize. This also means Urza has a kind of rebate: you pay 2UU to cast it, but then it enters the battlefield with an artifact and you can use the second ability to squeeze U out of the artifact. This gives me some hope that an artifact-heavy tournament deck could actually use the card. I could envision plays like dropping this on turn 5, then tapping its construct and another artifact and still being able to have 1UU available for another spell.

If Urza only had those first two abilities, it would probably be tried out as a commander somewhat, but it'd not really be an amazing card. But the last ability gives it an endless sink for all the mana it might be able to generate. The last ability, on its own, is kind of the worst ability. Paying 5 for a shot in the dark activation on a permanent you already invested 2UU in is a bad deal. In most decks, the chance that the ability would whiff and hit a land is too high for it to be a good investment. But as part of a total package of abilities on this card, the last ability ties things together nicely. The first ability helps the second ability get going, which lets you play more artifacts, which makes the token bigger. More artifacts also means more mana, which means more activations of the third ability, which also means more artifacts, which means the token gets even bigger still.

It's early, but I think this card has real potential. I don't know if the first real Urza card (Blind Seer notwithstanding) lives up to the character's importance in the game, but at least they succeeded in making a card that's interesting.

Well, it's really still too early to claim that there's an established niche, something potentially long-lasting. But Urza is making some waves in Constructed formats, so I'd say that my hopes are generally vindicated. Of course Urza is the best monoblue commander and is a great card for artifact-based decks in highlander formats, but I had no doubt of that.

What's more interesting is that Urza is showing up in tournament formats. Results are dominated by Modern, mostly the Thopter Sword archetype, which isn't really surprising. But Urza is flexible and is showing up in Vintage lists too. I've only spotted on published result in Legacy so far. The card seems to slot well into decks based around the latest iteration of Karn.
You must log in or register to reply here.
Share:
Facebook Twitter Reddit Pinterest Tumblr WhatsApp Email Link
Top